You Asked For It 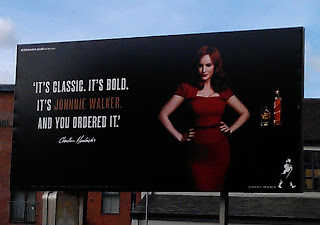 What is this advert trying to say?  Is it trying to compliment me on my excellent taste, because surely only people with fine reasoning skills would select such a "bold" and "classic" beverage?  Perhaps it is suggesting that, since I have already bought it - apparently by accident - I may as well bite the bullet and try it.

It's odd, because without that fanciful last line it would be a fairly standard positive advertising slogan.  With it, the quote seems bizarrely lacking in context, as though it is trying to evoke some sort of scene in which these lines are spoken.  I am genuinely struggling to conjure one.

Possibly it is positing a scenario whereby an attractive waitress is approving of my selection and will now come to bed with me.

The actress featured is Christina Hendricks, who I had to look up before I realised she was Saffron from Firefly*.  Knowing this I can only assume she is attempting to pull some sort of elaborate con.

Still, whatever the advert is actually trying to convey, it's at least fulfilled the primary objective of advertising - to get people talking about it.  It's all about brand awareness!  You can tell by the way they made the actual brand name a darker colour against the dark background.  Harder to see means easier to remember, right?

Hey, check out the cans on that dame.

* Apparently she is also in some sort of television programme about advertising, which it seems this advert is trying to emulate.  This is in itself another odd decision.