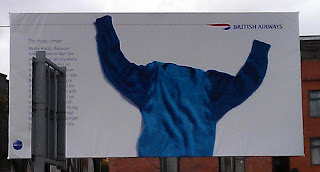 This billboard is positioned on a main road, though it's also fairly busy for pedestrians, being just down the road from a major commute train station.  So I get that it's not such a massive flaw that the text is too small to read while driving quickly past in a car.  (Also, it's Deansgate, down which nothing moves faster than a particularly lethargic sloth.)

It's just a shame they didn't know about this roadsign, which completely obscures the text from about 50% of viewing angles.  It's the only text on the board - I don't even know what it's saying, something about how their carry-on limits let you take huge jumpers on holiday - and it's got this honking great thing in the way of anyone actually engaging with it.

And even if anyone does have their eye drawn by the bold striking visual, the logo is small and inoffensive up there in the opposite corner where nobody's going to be looking.

Overall it's not a very good advert for anything except blue jumpers.
Advertising Fail