I tend to keep my web browser non-maximised, unless it's a site I'm working on.  Usually this is because I'm browsing while waiting for something else to finish and I want to keep it visible in the background, but not always.  Possibly there are deep-seated psychological reasons, a fear of commitment or some such.  Regardless, this is my use case.

As a result, whenever a friend of mine links to an article they have written in Starburst magazine, this is what I see: 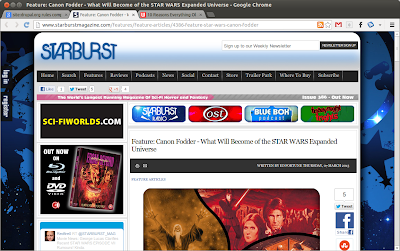 It's (judging by eye) about 25% advertising (largely cross-promotion), 5% menu and 40% dead space.  The headline is small and inoffensive, the writer's byline obscured.  But my primary gripe is the article itself is completely invisible, pushed off my window by an enormous image (which, incidentally, shares enough in common with the four lozenge adverts that it looks at first like another advert).  This is their standard layout, all articles are laid out like this - small header, big image, content out of view.  Even if I maximize my window there's only a paragraph or two visible way down at the bottom.

This got me thinking about contemporary web layout trends.  Surely this must be an unusual design decision? Well, apparently not.  I had a quick run around the first few large websites that came to mind and found that each and every one of them pushed content out of my window in favour of large, glossy images and either advertising or links to elsewhere on the site.

The small browser window only drove it home - as with Starburst, most of these articles were still almost entirely missing at full screen.

So, then, this is the state of the modern web - effectively, big cover photos on every article, inviting you to page down to reach the actual content.  On the one hand it's a sign that the web is growing up; publishers are aware that the vertical space is effectively infinite, and readers are comfortable with the journey down, so the notion of people not noticing content that is "below the fold" is increasingly outmoded.  The simple fact that I did not notice this for so long is an indication that it's not a bad principle.  On reflection, I don't generally load a web page and only look at what's immediately visible - I'll instinctively wheel up and down, forming an overall picture.  Possibly this is because I'm now so used to the top 600-or-so pixels being full of advertising, menus and cross-promotional nonsense that my eyes just slide right off.  Ad-blockers?  Browser plugins?  Pah.  I just live-edit my own visual input.  Easy.

But why did I notice it on the Starburst site?  I'll be honest; there's an element of petty competition.  As mentioned above, I usually arrive at the site to celebrate and share in a dear friend's success in the field of journalism, so naturally my instinct is to pick holes in it.  If it wasn't the site layout I'd be pointing out typos.  A charitable interpretation is that I'm helping them improve ("People like to be told when they're wrong, it's how we learn!") but deep down I just want to feel superior.


We stood on the precipice, looking out over the valley below.  "All the way over there, huh," Tony grimaced.
"Yeah, you can just make out the crash perimeter," I confirmed, pointing into the distance.  "We came down near vertical, so no matter how far we are above ground level it shouldn't be too far away from there," I started to say, but before I could finish "vertical" I was interrupted by a terrible roar from below.
With a tremendous crashing sound the forest canopy beneath us shook and rippled like the surface of a lake before tearing asunder to reveal the source of the noise - a gargantuan creature rising to its feet.  The behemoth was so large that as fast as it moved, its sheer size dictated it took a clear seven seconds to reach its full height.  I glanced at Tony as the displaced air rushed past us; he was looking up at the beast in awe, unafraid, already sizing up its potential weak spots and tactical assets.
"What the hell do you call that?" he asked, expecting me to continue my biology travelogue.
"That," I replied, "I call a Big-Ass Mofo."
Tony grinned, and as we simultaniously readied our climbing gear I decided he had to be about as crazy as I was.  He helpfully confirmed this with his next declaration.
"Race you to the top!"