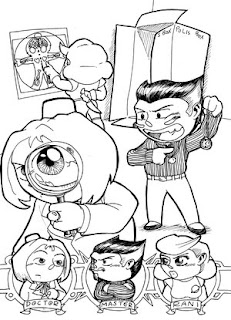 The other day I was reminded of some work I did back in the day - this illustration for Walking in Eternity, a charity Doctor Who anthology. I quickly realised that it was not available to view anywhere on the internet, which was a situation that clearly needed to be remedied. So! Here it is, newly pressed and available for purchase as a print.

It seems reasonable that any proceeds will go to the original beneficiaries, the Foundation for the Study of Infant Death.
Posted by Andy at 10:09 No comments:

Email ThisBlogThis!Share to TwitterShare to FacebookShare to Pinterest
Labels: DeviantArt

"Snickers" (still often referred to in my house as "Marathon", no matter how long ago they rebranded) are currently running a competitive promotion. They're producing two variants, named "More Nuts" and "More Caramel"; you can probably take an educated guess at the difference between them. It's probably more apparent from the labels than it is from the contents, both of which taste like ... Well, like a Snickers bar.

The "More Caramel" variant is packaged in an easily-identified tan wrapper. "More Nuts", on the other hand, is either the standard Snickers brown or so close as to be indistinguishable. Certainly shop staff appear unable to tell the difference as several times now I've seen them mixed in with the standard bars.

At first I had assumed both variants differed from the standard bar. However I'm no longer certain this is the case. It's possible the wrapper colouring is intended to indicate that "More Nuts" is in fact the standard Snickers bar, temporarily relabelled to reflect that it is not "More Caramel". Either way, the fact that it's not immediately apparent - clearly either I or the shelf stackers have misunderstood - suggests something has gone wrong somewhere.