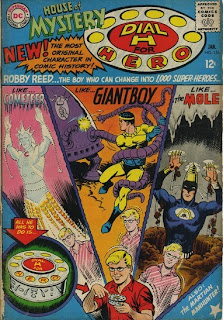 I avoided DIAL H when I saw it was being written by China Miéville.

If I had to fall down on one side or other of the fence, I would probably describe myself as a fan of Dial H For Hero, though I have never read an issue of the original series. It was, by all accounts, a fairly harmless effort with a charmingly dopey gimmick; the kid hero (or, later, heroes) discovered a magical device that they could use to take on the form and abilities of a random superhero. When it was revived in the 80's it became a wish fulfilment fantasy on multiple levels, as not only was it a story about a kid (just like you!) granted fantastic abilities, but all of the costumed identities were culled from ideas submitted by fans.

As I say, I've never read any original DH4H. I'm familiar with the concept because in the decades since audience-participation comics became unfashionable the H-dial has reappeared again and again, becoming firmly entrenched as a key mystic artifact of the DC Universe. It cropped up in the 30th century with the Legion of Superheroes, was claimed by the appropriately-named Hero in Superboy and the Ravers, and was followed by its former owners into Wolfman's Teen Titans. It seems a favourite of writers who want to explore their characters' psyches or investigate the abilities of the dial itself - and above all, pull out an ass-load of new superhero designs.

Decades of use in a shared universe has given the H-dial exactly the sort of combination of goofy setup and internal consistency that tickles my buttons; it's daft but it's taken seriously by the characters who encounter it. They acknowledge that it's absurd and yet scary powerful. This, I love. So when an ongoing Dial H series was launched in 2012* why didn't I snap it up?

Some years earlier there was another series much advertised as being written by a Famous Proper Book Author; Identity Crisis, by Brad Meltzer. It was ... Well, it was well written, but it left a bad taste in a lot of people's mouths as it coloured various characters' histories with certain Serious Topics retroactively. The series carved a ravine across the face of the DCU and though it drove stories forwards for several years, I consider this a mark of the standard of the writers who came after, who took the harsh edges and refined them into a delicate, intricate engraving. They made it work despite Meltzer, not thanks to him. 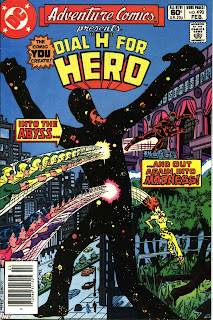 When I heard China Miéville would be heading the new Dial H series I was therefore sceptical. Big Name Proper Author, you say? Taking on a beloved obscure concept for a gritty reboot? Yeah, that won't go well. No matter how many people have recommended Miéville's work as an author of books, I knew this did not necessarily translate into good comic book writing and certainly was no indication they could play well in a shared universe. Besides, surely it would have little to do with the old, goofy dial. This wasn't someone who would treat the concept with the reverence it deserved! They must have dug out an old property that no one else was interested in, so that the Big Name Author could trample all over it to their heart's content.

Yesterday on a whim I picked up the TPB of the first seven issues (#1-6 and #0) and I am pleased to find myself proven wrong. Miéville is clearly intimately familiar with the dial's history, dropping several names and backreferences - not so much as to befuddle new readers, just enough to delight old friends**. There's also a clear love for the absurdity of the core concept, with throwaway heroes like Hole Punch and Cock-A-Hoop (acknowledged in-universe as "just a bad pun"), and a definite grasp of graphic storytelling. Plus the story itself is very well crafted, with blatant clues to later revelations laced naturally into events so you only spot them on a second reading***. If I have a reservation it's that they appear to have a declared intent to delve into the origins of the dial (something not done in 50 years of Dial action). Most often these things are best left a mystery. Still, I have a growing confidence in the creative team that they can spin a yarn that both enlightens and entertains, that enriches and establishes without effacing.

My other initial concern about picking up a title by a Big Famous Proper Author was that they would inevitably leave in order to write Big Proper Books; thankfully as of #12 this has yet to happen to Miéville. I look forward to a long and entertaining run.

* I didn't pick up the 2003 H.E.R.O series for entirely different reasons. I don't think I was in a place where I wanted to pick up new series, and in any case it was marketed as too much in the direction of dark doom for my liking. I like a gritty reboot as much as the next man but this felt - from the marketing material alone - too up itself.
** Continuity gets a bad rep. When you build a new world your first job is to create that backstory, fill it with a sense that it was here yesterday, and what better way to do that than by referring to past adventures? Bilbo mentions Gandalf's past visits in the opening chapters of The Hobbit, and the events of The Hobbit are referenced again in the Lord of the Rings. Does that make Hobbit any more required reading than the nonexistent accounts of Gandalf's long association with the Shire? Certainly not, but it does enrich and inform the reader of LOTR to have done so. Similarly, if one knows nothing of Chris King one will not be locked out of understanding Dial H, though you may miss some subtleties of the foreshadowing. Alienating new readers is the fault of the writer, not the persistent world.
*** Nobody, for example, breaks out of an otherwise pressing tactical discussion to ask someone what they're doing with that tribble.
comics