All This And Less

June 12, 2013
This advert is running in Comixology right now: 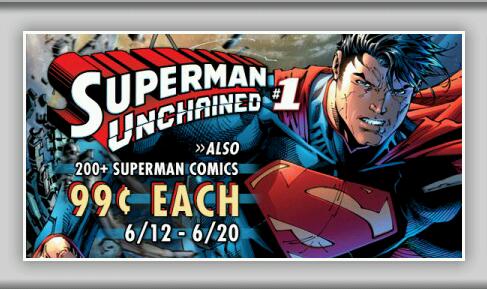 Any sane person would interpret this to mean "Superman Unchained #1 and 200 other comics are all on sale for 99¢." At first glance you might not realise other comics are involved, because that text is de-emphasised. What the advert is trying to very strongly imply, to get you to tap on that box without reading it properly, is that Superman Unchained #1 is only 99 cents.

It's not. It's like $5. What the advert is actually saying is that Superman Unlimited #1 is now available to buy, and in unrelated news 200 issues of various Superman comics are only 99¢.

To be clear, I don't feel cheated or decieved - I noticed the specific wording and figured something was up before tapping through - but I am disappointed by the clear attempt to deceive. Something that is by now so thoroughly ingrained into advertising culture that I'm sure whoever laid this out didn't give it a second thought. This wasn't intentional evil, it's just how adverts are laid out, you know?

That said, I don't recall the last time I saw this exact con (the two prominent statements separated by a tiny line of text that makes it clear they are unrelated) outside satirical mockups. I think there's a phrase for it. Implication by proximity, maybe? Well, whatever. I'm very disappointed in you, DC.
Now, excuse me, I'm off to buy 12 issues of All Star Superman for 99¢ each.
Advertising comics