There's a ... Thing, in the comic book industry, occasionally, where they do a SPECIAL EDITION! of a comic book - there's a word they use but I can't remember, like PURE or something - where it's just the linework, no colours. So that you can Truly Appreciate the Craftsmanship of the Artist.

I've always been a bit nonplussed by that. I know how hard colouring is, what it adds to the page, the context and texture. Mood, emotion, environment.

Take a look at this page, for example. 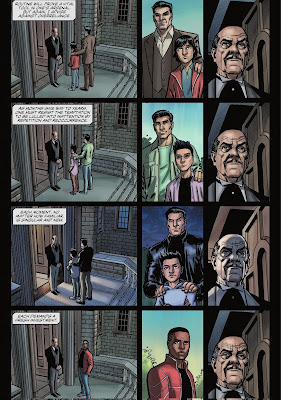 Each row of panels is intentionally similar; the third panel is - not quite identical, there's a tiny amount of different hatching on the door but - basically the same. The inker hasn't blocked out Alfred's face or added shading. The line work is, structurally, the same.

But the lighting is different! It's happening at a different time of day, it's dark out, Alfred's lit from inside. Without the colours you wouldn't get that so starkly.

(There is some dark sky in the 2nd panel of that row so I have to assume it's the intent of the whole team, but I'm not sure it has any deeper meaning. Me, I'd have put row 2 at night, being as that's Jason Todd, and he's generally the darrrkest Robin. Maybe that's too on-the-nose.)

(EDIT: Unless I'm one out, and the top three are Jason, Tim, Damien? Which would make sense, for the lighting.)

Comics are a team effort and while, yes, you get superstar pencillers and colourists rarely reach the same heights, it's pretty disrespectful to art and artist to strip part of it away and present it as better. "This actively detracts from the experience," it says. "We only put it in for babies who don't understand real art, which is of course the lines."

I know there's editions that go further back and only present the pencils and/or the scripts, which is fascinating as a look inside the process, but it's not a purer or superior experience, it's not more refined. It's a making-of. It's not finished. Great as bonus material, sure, but not a whole book.