August 14, 2014
Guardian headline: "This is a war and we are soldiers on the front line"

(Edit: Since this morning the BBC headline has changed to "Anger at crackdown on protests".)

There is certainly such a thing as local bias - a riot in your back yard will naturally get more coverage than the same thing on the other side of the world - and, yes, on occasion, local media will blow a local story out of all proportion because making news is what they do.

I also know that following people in a certain area on Twitter will distort your channels of communication such that distance becomes less meaningful, you become more directly aware in things that aren't necessarily as significant to you, or in a global sense, as they might be. I mean far be it from me to imagine that what happens in the USA is inherently more important than, say, the cease fire in Gaza or Russian convoys advancing on the Ukraine. If we judged global significance by trends on Twitter, "That's So Raven" would currently be headlining.

Even taking all this into account, I'm slightly startled that this particular piece isn't getting more UK coverage.

The BBC2 and 6Music radio news segments are about two and a half minutes long, so they have to pick the three or four news stories that are of greatest interest to their listeners. The top stories this morning were "Annual event is once again proceeding as planned", "Something might or might not cause cancer" (which I've always thought of as newsreader code for "Slow news day"), and "Words continue to be added to dictionary". Not "American police are taking up arms against their own citizens".

It's at least made it onto the BBC front page, though less prominently than all the stories mentioned above. Between "Pope goes on tour" and "Pakistan also has protest march".

Seeing them alongside each other like that, it would be interesting to compare and contrast the US and Pakistani responses to their respective protests. 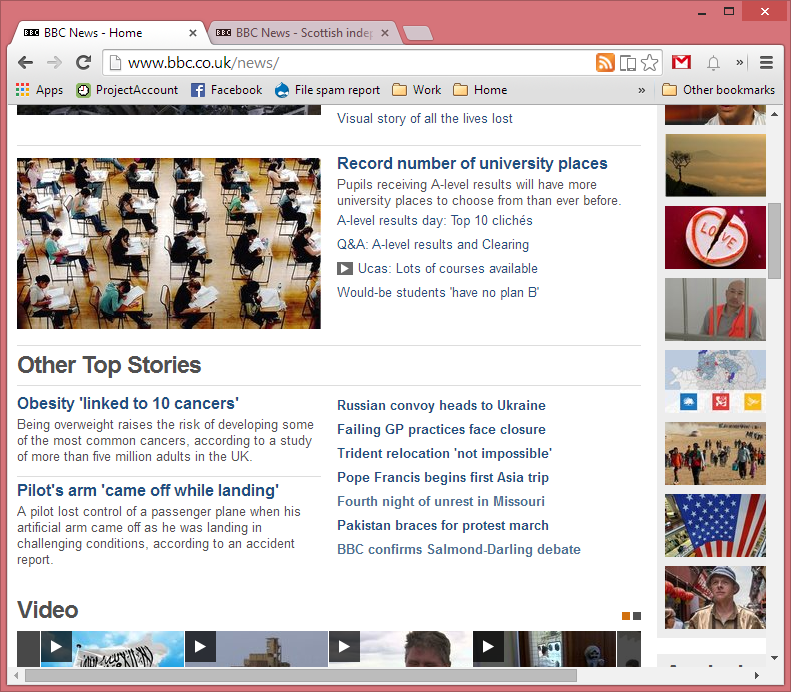