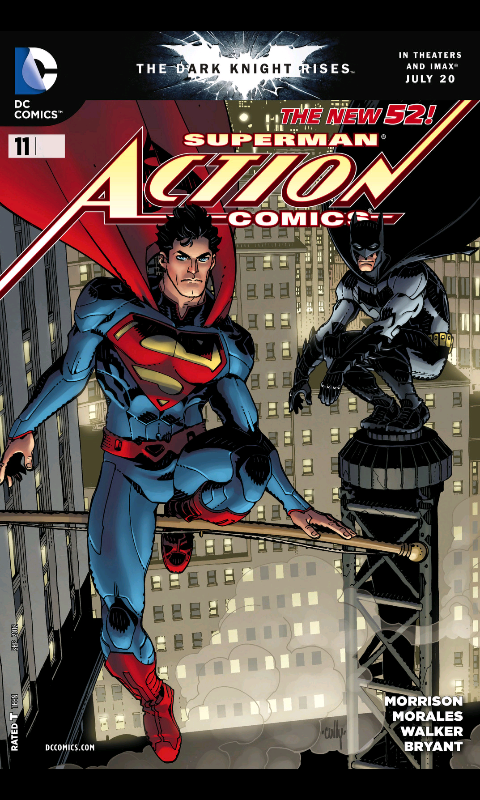 I've been suckered in by - I mean taking advantage of - a lot of Comixology sales lately, and this week I picked up Grant Morrison's run on Action Comics. 99¢/69p an issue, you can't pick up the trade paperbacks for that, even on Comixology.

Don't get me wrong. It was good. There's no denying it was good. Morrison has fantastic ideas. Brilliant. He knows the magic of words and worlds, every panel on every page is a work of genius. The problem is not that he's not good. The problem is that he's so far past good that it's just awful. So brilliant that it hurts to look directly at it.

It's less evident earlier on, where things are more coherent, but even there there are digressions, non-sequiturs that don't pay off for nearly a year, and usually that's a great thing, the mark of a solid writer who's planned ahead. The first line of the dialogue in the first panel of the first page gives away something that isn't clear until issue 16! And that's great. But it's different when you cut away from a cliffhanger to tell an apparently unrelated story for two months. At that point you're actually detracting from the story.

It becomes - I don't want to say worse - more acute near the end of a run, and I have to wonder if he overestimates the amount of time he has and gets caught up in his famous deconstructed storytelling, because there's an acceleration. By issue 18 here, same as the last issue of Final Crisis, Morrison has hit this kind of plateau, a Zen trance of creativity. He's trying show you how all the plot threads tie together (And they do! They really do! It really is a beautiful tapestry!), it's just that he can't articulate it to us lesser lifeforms in anything approaching a traditional narrative.

So you get this kind of incoherent mess, where every line of dialogue is epic, but they don't necessarily relate to each other. It's not even that the plot is indecipherable, it's all there in front of you. It's just like piecing together a jigsaw, rather than reading a story; a cold logical exercise in deduction instead of a living thing that is talking to you. The overall experience is a confusion of colourful shapes each yelling, "The god-weapon supermind has only to feel!" And, "See my face in everything!" And, "Consider yourself exorcised!"

Here the confusion infests fewer pages (during which four new characters who have only been mentioned in passing turn up solely to excise a redundant plot thread) but it is still that distinctive, familiar Morrison morass. To be brutally honest, I feel like the run is saved by the backup features, in which a different creative team expand on or explore some brushed-past plot point or missing events from the main story. 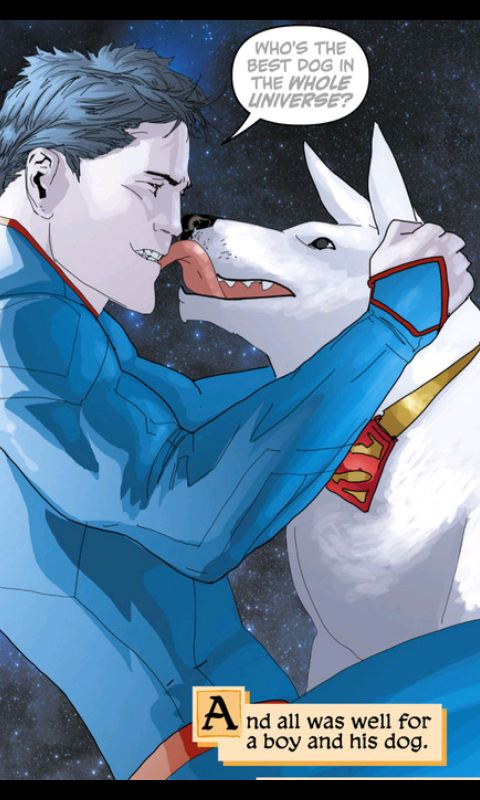 I love a lot about this run. I love the changes to the Superman mythos - Krypto especially, and the deft amalgamation of every rewrite of Brainiac's origins. I love the suggestion that rather than being a simply editorial byproduct of "Flashpoint", the changes to Clark's status quo (his parents' deaths, the annulment of his wedding to Lois) are actually part of this 18-month / 10-year plot arc. And I love that it's done with such art, rather than thrown in on page one with a cloaked villain cacking about how much they hated the old universe anyway (I'm looking at you, Stormwatch).

Although, of course, it is right there on page one, if you go back and look.

Which is brilliant.
comics